So, I originally found this recipe for “Gluten Free Oatmeal Cookies with Dried Blueberries and Pecans” from The Devil Wears Parsley, and was excited by the prospect of making a healthy, and more importantly, tasty cookie. However, don’t get fooled by the word “cookie”. These “cookies” have a chewier consistency that reminds me more of a Clif Bar or Lärabar than an old-fashioned oatmeal raisin cookie. Hence, my decision to call them chews instead.

Instead of becoming the dessert I initially thought they were going to be, I found myself eating these guys as a mid-day snack. Like those nutrition bars you eat before or after a workout (or for breakfast when you’re running out the door like me), a few of these blueberry oatmeal chews will fill you right up. Plus, there’s no guilt from eating “bad” foods either. I love how the blueberries provide a punch of sweetness, while the nuts add some texture and a slight crunch.

I even brought this recipe with me to a bridal shower. Sound weird? Each attendee actually brought one GF recipe so we could put together a recipe book for the bride-to-be. What a great idea, because it was after getting married that I really started cooking! It’s nice to have a base of recipes that have already been tried and tested by your loved ones too!

*Above recipe is adapted from Natalie Wiser-Orozco’s original recipe. You can also substitute any other type of fruit or nut to change it up

Don’t forget to preheat the oven to 350 degrees while you’re measuring out and mixing everything together.

For any new bakers (or for those like me who don’t always follow directions to a T), you’re going to want to keep the dry and wet ingredients separate until you actually have to combine them. The reason, you ask? To make the final mixture more uniform. If you try to do everything at once, you’ll have to work the mixture longer, creating a rougher, more leathery texture. And dry, cracked leather does not sound good when you’re talking about sweets!

Let’s start with the dry stuff – combine the oats, dried fruit, nuts, and salt in a medium bowl. I used Quaker Oats gluten-free oats, and learned that oats are naturally GF, but become contaminated by stray grains (wheat, rye, or barley) during the harvesting or transportation stages. The oats then have to go through a method for removing the non-oat grains to meet GF standards.

The original recipe called for pecans, and since I’m not a big fan, I swapped them out for cashews. And not just any store-bought cashews – I was lucky to have some roasted cashews on hand from when my mother-in-law visited a cashew farm in Thailand. Extra delicious, those guys are! I also took out the dried coconut, but don’t think it affected the final outcome.

Then, in a small bowl, mash the bananas and mix them with the vanilla, apple cider vinegar, oil, and honey. A litte note here as well: I switched out coconut oil for olive oil, which is a no-no for baking because olive oil has a distinctive taste. But, fortunately, it’s masked with the rest of ingredients in these chews! So, win for me for not having to go out and buy coconut oil!

This is about when things started to smell good too! Well, that might also have something to do with me adding extra vanilla whenever a recipe calls for it. A little extra vanilla never hurt anyone, right?

Add the wet ingredients into the dry ones, making sure all the oats have a wet coat on them.

Start scooping the oatmeal mixture out of the bowl and rounding them into 1 1/2″ balls before placing them on a cookie sheet. Next, flatten the balls down until they’re about a 1/2″ thick to ensure even cooking. I like to make mine a little thinner, so they get a nice crisp to them.

However, the hubs likes ’em fat and chewy, so I always make a mixture of both sizes. The oatmeal chews don’t expand much when cooking, so you can arrange them a bit closer together than you would normal cookies. 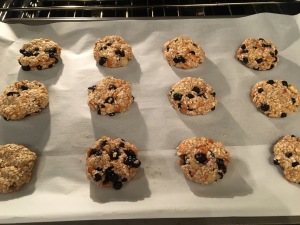 Stick them in the over and bake for 25 minutes, or until golden brown.

Pull out your oatmeal chews, and let them cool down for at least 5 minutes before stuffing your face.

Voilà! You now have a plate full of snacks that are heartier than chips, but more interesting than a piece of fruit.