There’s nothing quite like having a bowl of chicken soup when you’re sick. With my hubby and I both catching some kind of flu, I knew what was going to be on the week’s meal plan – homemade chicken soup.

Now, I grew up getting a can of Campbell’s chicken noodle soup whenever I was sick, but my eyes were opened in college when one of my roommates caught a particularly bad cold. After hearing about this, her mom promptly drove out to our apartment and started making her famous cold remedy – chicken soup. The recipe was pretty simple, consisting of boiling a whole chicken in water with onion and garlic to make chicken broth from scratch. Come to think of it, that was the first time I ever saw someone cooking a whole chicken! But, that’s another story…

While that soup was just what the doctor ordered for my roomie, today’s recipe builds upon it, turning it into a main dish instead of just broth. As for the noodles from my childhood soup, we’ll be replacing it with rice. Sound weird? Try it! Trust me, it’s really good! Or if you’re still skeptical, order the chicken soup from Avila’s El Ranchito.  Well, I guess you can only if you happen to be in SoCal…

I first tasted the deliciousness that is El Ranchito when I was working in LA. I usually ordered the Chilaquiles Con Huevos, but one day I ended up ordering Mama Avila’s Soup because I had a cold then too. Lol. And boy, was I surprised by how good boring ol’ chicken soup could be! Now, whenever I make this soup, it always reminds me of sitting around the table, enjoying lunch with my co-workers.

*Note: I only use one tomato, because the hubs doesn’t like them…so add another if you want more of a tomato base to your soup

Starting off with the freshest ingredients not only brightens up your soup, but makes it more colorful (and healthy) too!

Not sure if your avocado’s ripe? Here’s a quick tip that’s much more reliable than giving it a squeeze to see how soft it is. Simply twist off the stem. If it’s green underneath, your avocado is at it’s prime. If it’s brown, the avocado’s overripe and will have brown spots in it. And if the stem doesn’t come off, then, it’s just not ripe yet. 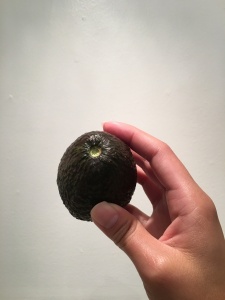 And sure enough, the trick works!

With that little produce tip out of the way, let’s get started on our prep! You’re going to want to dice the onion and tomato, as well as mince the garlic to add flavor into the chicken broth (and chicken, since you’ll be cooking it in the broth mixture).

Start off by pouring the broth into a large pot with the garlic, and equal parts of tomato and onion. You’re also going to want to cook your rice at this time so it’s ready by the time the soup is finished. I actually like to use leftover rice so the grains are more separated, so if you already have some in the fridge, hooray – you get to skip a step!

While you’re waiting for the broth to come to a boil, get your chicken ready and finish up the rest of your prep by cutting the avocado into cubes, roughly chopping up the cilantro, and cutting the lime in half.

*Note: I left out the jalapeño this time just in case the spice would affect my tummy, but would make sure to add it into the broth with the tomato, garlic, and onion any other time

Once the broth starts to boil, it’s time to add the chicken. You’re going to want to make sure the chicken is completely covered with liquid so it cooks more evenly and doesn’t dry out. Then, bring your soup to a boil again on medium heat before lowering it to a simmer, covering the pot with a lid to finish cooking the chicken. After about 10 minutes, check to see if the chicken’s ready.

In case you’re not sure if the chicken’s cooked yet (because it’ll look 100% ready from the outside after just a couple of minutes), take a piece of it out and cut through the center of it with a knife. If it’s completely white (no pink) and you can see the striations in the meat, then you’re good. If not, stick that sucker back in to simmer.

Now, comes the shredding. If you don’t mind getting your hands dirty, use your hands to pull the meat apart, or wear gloves for a cleaner option. Another trick I learned is to use two forks (one in each hand) to shred the meat. What’s your go-to method?

After this is complete, you’re ready to assemble everything! Start with a thin bed of rice, warming it up in the microwave if you’re using leftovers. Then, ladle in the soup, making sure to get a little bit of everything in your bowl. Top it off with a small handful of raw onions, avocado, and cilantro before finishing off by squeezing about a tablespoon of lime juice into your bowl. Mix it all together and give it a taste, adding more lime or broth to your liking.

Here’s a visual step-by-step as well. 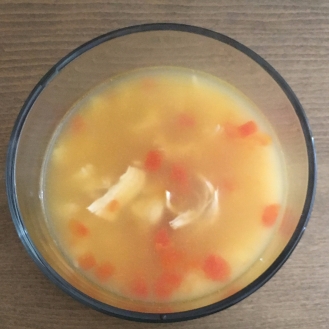 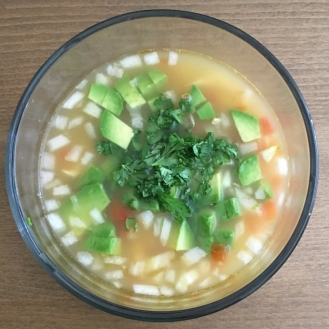 To see the different layers of the soup, check it out from this perspective. 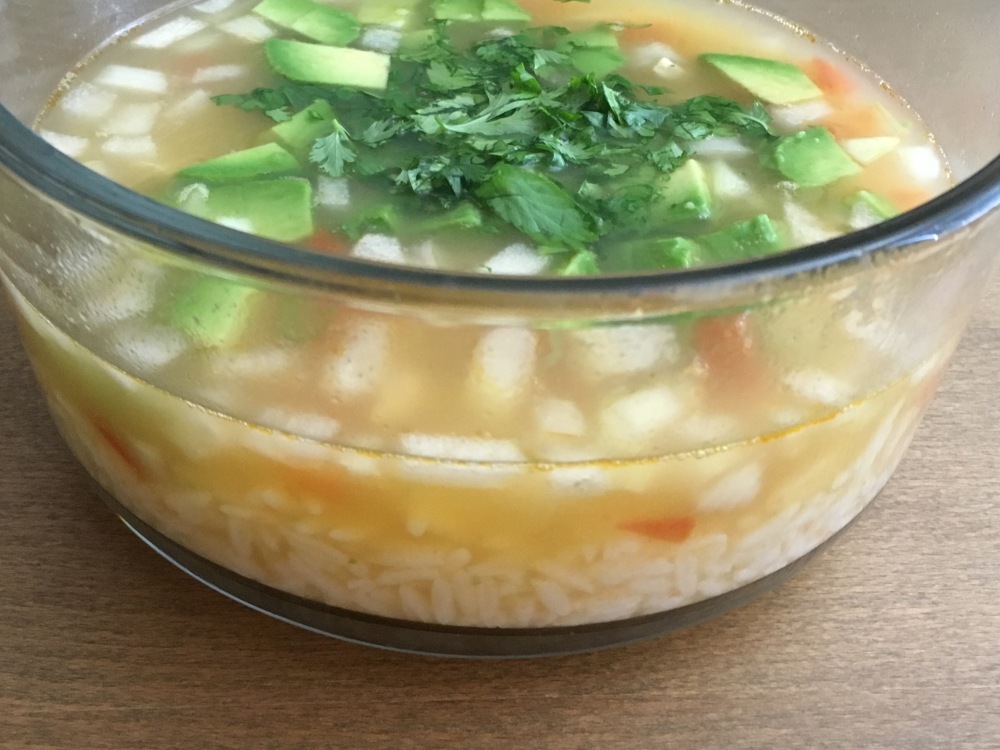 Lastly, I’ll leave you with me mixing up the goodness we cooked up today!

Until next time, enjoy!